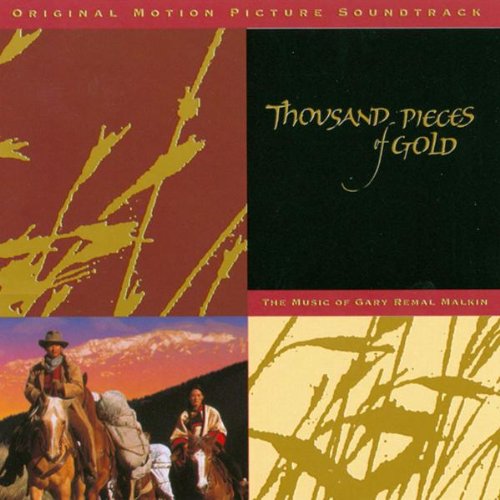 Emmy award winning Gary Remal Malkin's debut release is the soundtrack to Thousand Pieces of Gold, a film featuring his original score, which blends Chinese and western music in a distinctive and highly evocative way. Truly a masterpiece.

Born and raised in New York, Gary Remal Malkin has been playing the piano since the age of four, composing since twelve and producing and composing professionally since 1978. During high school, he studied composition and drama at the Interlochen Arts Camp in Michigan and went on to study piano and composition at USC and the Oberlin Conservatory of Music. In addition, Malkin did post-graduate work at San Francisco State University, studied jazz arranging and orchestration with Dick Grove and attended the renowned Ali Akbar College in Northern California, focusing on his interest in ethno- musicology under the tutelage of Ali Akbar Khan. Malkin's formal training provides a solid foundation for his versatility and continuously evolving style. With elements of orchestral, funk, rhythm and blues, jazz and ethnic world music, his broad musical palette defies categorization. He is equally comfortable with state-of-the-art computer technology and acoustic instruments, effortlessly blending the two to give his compositions added dimension, depth and emotion. In his professional career, Malkin has achieved major success as a composer for film and television, with a wide spectrum of credits attesting to his versatility. He has created original music for internationally distributed feature films, network and cable television series and documentaries and more than 1000 television commercials. He also has contributed his talents to a wide range of causes and socially responsible projects. The quality of Malkin's musical works has not gone unnoticed. He has received a number of prestigious awards. Among them, the highlights include ASCAP Film and Television Awards, four Emmys, a Cine Golden Eagle, a Joey and grand prizes in Best of the West, the NY Film and Television Awards and the ADDY's. Driven by an urge to find his own voice of expression, Malkin decided to actively pursue success as a solo artist in the early 1990s. Although he has embarked upon a new direction as a solo artist, Malkin continues to work in film and television. He is the principal composer and producer of the Remal Music Group, a San Francisco and Los Angeles based company that creates original music for films, television programs and commercials. Malkin currently resides in Northern California with his wife and daughter.

Season’s greetings, garden lovers! For the past several years as we have approached the holidays, it has been our tradition to gather up some great gardening and gardener-friendly gift ideas.…

Tour a Garden Where Annual and Tropical Plants Steal the Show

Annual and tropical plants can add extraordinary colors and textures to any garden, especially from late summer through early autumn, when many perennials fizzle out. In Fine Gardening issue #177,…

Public gardens are some of the best places to see high-impact, high-quality horticulture. Regional tradition, enthusiasm, and great gardening come together across every corner of North America in these wonderful…

Everyone likes an upgrade. Whether it’s a faster car or a more efficient cell phone, it’s hard to turn down a better version of something you already like. Plants are…

Garden Photo of the Day

Daily Images to inspire your imagination.

Don't forget to sign up for the
Garden Photo of the Day Newsletter and special offers!

In-depth information on all types of plants

Browse the Guide
View All

Listen to the latest episode

Everyone likes an upgrade. Whether it’s a faster car or a more efficient cell phone, it’s hard to turn down a better version of something you already like. Plants are…

Get the latest how-to and design inspiration articles plus special offers sent straight to your inbox.

Get the latest how-to and design inspiration articles plus special offers sent straight to your inbox.

This won't delete the recipes and articles you've saved, just the list.

You must be a registered user to access this feature.

This feature has been temporarily disabled during the beta site preview.

Are you sure you want to delete your notes for this recipe?

You must be a magazine subscriber to access this feature.

Get complete site access to decades of expert advice, regional content, and more, plus the print magazine.